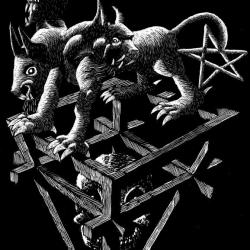 Demonstrating the connection by opposition of the two elements, the alchemical symbol for earth is that of the air, but inverted. Composed of a horizontal line (which can sometimes cut off the apex) placed across the triangle signifying water, the earth sign thus represents stagnant water, which eventually solidifies into matter. The element of Earth is symbolized by the hellhound cerberus and a skull in a three dimensional representation of the icon of Earth: an inverted triangle with a line through it 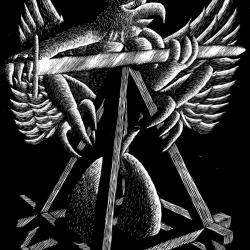 The alchemical sign for air is a triangle whose apex points upward, its upper part crossed through by a horizontal line(although sometimes the tip is removed).The symbol is reminiscent of that of fires and represents passive heat, from which its association with air is derived. In alchemical thought, air is in constant opposition with earth. The element of air is symbolized by a gable bird man and a pair of lungs in a three dimensional representation of the icon of air: a triangle with a line through it 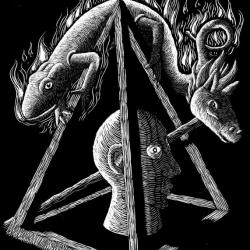 The adherents of this early form of scientific philosophy regarded fire as the central element. It is considered both unifying and stabilizing force, and most alchemical practices begin and end with fire. It is symbolized by an upward-pointing triangle, signifying rising flames, and hence solar power and life. In alchemy fire is contrasted with water. The element of fire symbolized by the salamander and the head in a three dimensional representation of the icon of fire: a triangle. 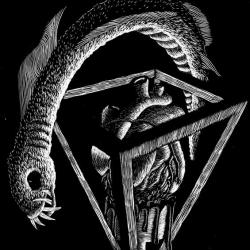 Emphasizing its opposition to water, the alchemical sign for water is the sign of fire inverted and can signify a cup ready to receive water. It is lunar rather than solar. When the two opposing symbols are interlocked, the union of the contrasting elements of fire and water is attained, creating “fluid fire” or “fiery water.” Alchemists considered the elemental pairs of triangles as representing the forma (essence) and material (sub-stance), and hence the spirit and soul of everything in existence. The element of water symbolized by a water snake and the heart in a three dimensional representation of the icon of fire: an inverted triangle.